Louis P. Miller with contributions from Marie A. Miller

During the First World War and at a time of extreme need I was wonderfully healed of what was then called Spanish influenza. My wife and I had just moved to a new address in a strange city, where I had obtained work. On Saturday I came home in misery and suffered greatly during the night. We had no telephone and knew no local practitioners, but we did know that there was a Church of Christ, Scientist, in the neighborhood, as we were planning to attend it the next day. On Sunday morning, before Sunday School was to convene, my wife walked to this church to locate a practitioner and ask for help. She was introduced to the Sunday School superintendent, who was also a practitioner, and told her of my condition. My wife was informed that there was no such thing as a new disease to be feared, and was told of the availability of God's help in our extremity. The practitioner said she would immediately help us before the Sunday School opened.

Send a comment to the editors
NEXT IN THIS ISSUE
Testimony of Healing
My mother had Christian Science... 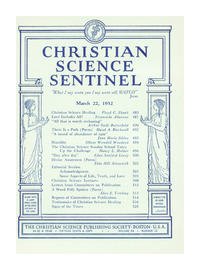