FIDELITY, THE BASIS OF SPIRITUAL GROWTH

Every vital task in the establishment and progress of Christianity has been accomplished by one whom God has chosen because of unquestioned fidelity. Divine Love and wisdom never bestows its supreme tasks upon the unworthy and unfaithful.

Let us consider Abraham, whose name Mary Baker Eddy, the Leader of the Christian Science movement, has made synonymous with fidelity (see Science and Health with Key to the Scriptures, p. 579). Throughout all his wanderings this man of God was faithful to the trust bestowed upon him by the Father. There is no evidence that he questioned the wisdom of God in sending him about the several missions which were to make him, for a major part of his life, a nomad, without a country he could call his own. His supreme test came when God commanded him to take his cherished son, Isaac, to a mountain in Moriah and sacrifice him on an altar. Abraham neither questioned the wisdom of the one divinity on that occasion nor attempted to secrete Isaac from the eyes of God. Nor did he suggest a substitute. But his compliance with his highest sense of Deity won Isaac's release and won for Abraham the promise (Gen. 22:18), "In thy seed shall all the nations of the earth be blessed; because thou hast obeyed my voice." 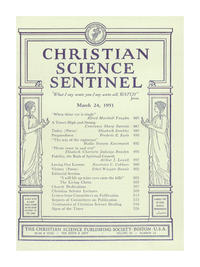