One of the high lights of the Committee year under review has been the broadcasting of an address on Christian Science by this Committee over radio station VPRO, Hilversum. Quite unexpectedly the request came from this liberal Protestant radio foundation for our participation in a series named "Op bezoek bij anderen" (Visiting Others). In the fifteen minutes allotted, only a brief outline of our religion, the life of our Leader, and the activities of the Christian Science organization could be presented. The response, however, was gratifying. Favorable comments on the part of non-Scientists were heard, inquiries received, and newcomers at the services and Reading Rooms reported, while some listeners took up the study of Christian Science seriously. It was the first Christian Science broadcast over one of the important stations in the Netherlands.

Send a comment to the editors
NEXT IN THIS ISSUE
Testimony of Healing
I am so glad that in my girlhood... 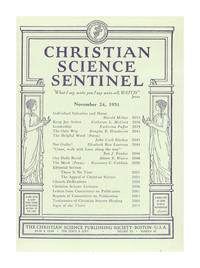