Like the woman spoken of in the Bible (Mark 5), I had been to many physicians over several years and did not regain my health, "but rather grew worse." Over thirty-six years ago in Salt Lake City, Utah, I underwent a major physical operation which left me in such a weakened, nervous condition that I went to California to recuperate, and arrangements were made for me to enter the hospital in Salt Lake City for a second operation. However, I never entered the hospital the second time, for through the help of a friend I became interested in Christian Science, purchased a copy of Science and Health by Mrs. Eddy, and began to study.

At first my progress seemed slow, but as time passed and I continued to study and imbibe the truths contained in our textbook, I found that a change was taking place in my thinking and that the healing power of Christ, Truth, was being manifested on my body. This physical change was so apparent that people noticed my improved appearance and asked what I was doing.

Send a comment to the editors
NEXT IN THIS ISSUE
Testimony of Healing
I shall always be grateful that... 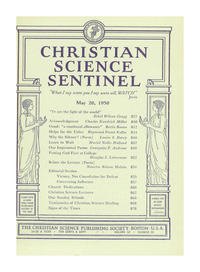