Mary Baker Eddy is extolled by Christian Scientists and literary critics for her scholarly, although sometimes unconventional, use of words. This is attested by the fact that some lexicographers are including in their various dictionaries and thesauri the significance given to words by Mrs. Eddy in her explication of Christian Science. Her ability to bring out the delicate shades of meaning that have been overlooked by orthodox usage have led many to accept her as one of our leading lexicologists, particularly in the religious field. It should be understood clearly, however, that Mrs. Eddy employed, dissected, and defined words solely to bring out spiritual facts which would aid the reader. She tells us in "Science and Health with Key to the Scriptures" (p. 338), "The dissection and definition of words, aside from their metaphysical derivation, is not scientific."

In this light her use of the word translate in its various meanings is worthy of consideration. On page 115 of Science and Health, in what she terms the "Scientific Translation of Immortal Mind," she uses the word to set forth the great facts of existence, to depict clearly the nature, substance, oneness, and completeness of God and man, His idea. Here she makes absolute being appreciable to human consciousness. "Translation" is used in its highest possible significance, to indicate that state of consciousness in which the human is completely disallowed and its sense of mutation scientifically destroyed by the acknowledgment of the ever-presence of eternal existence. This expository sense of translation is explained on page 22 of "Miscellaneous Writings" by Mrs. Eddy where she says, "Christian Science translates Mind, God, to mortals." 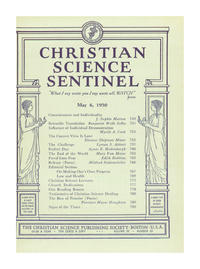