THE LESSON OF NAAMAN

In II Kings we read that there was a great man in Syria, Naaman by name, who held the office of captain of the king's army, and that he was a leper.

In Naaman's household there was a little Israelitish slave who persuaded his wife that a religious leader in Israel called Elisha could heal Naaman of his leprosy. This little maid's profound faith in the prophet's ability to heal decided Naaman to make the journey into Israel, taking with him a letter from the king of Syria to the king of Israel. We read that on arrival Naaman was sent to Elisha, arriving at the door of the latter's house with horses and chariot. 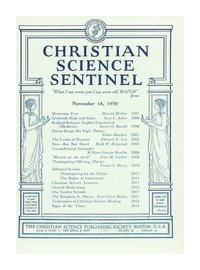