When John was nine years old, he went to live in the home of some Christian Scientists. Until that time he had been left pretty much to do as he liked. Nobody seemed to care where he was or how he spent his time when not at school, so long as they were not troubled by him.

In his new home love abounded, but at first he did not respond to the love shown him, but would turn away, almost afraid of a kindly touch. To John it seemed just as easy not to speak the truth as to tell the truth; he did not know the great difference between honesty and dishonesty. 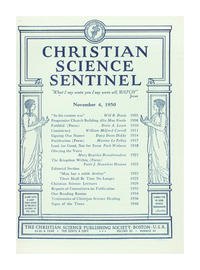