STICKING TO THE RECIPE

A Student of Christian Science was recently given a recipe for a cake which was sparing on the more severely rationed commodities in her country. The recipe was so simple that she refused her friend's offer to write it down for her, feeling confident that she had committed it to memory. After a lapse of some days the student had an opportunity to try out the recipe. The result was, however, most disappointing. The reason for the failure was uncovered when a written copy of the recipe was later received, a mere glance at which revealed that two small but very important ingredients had been omitted!

To obtain the best result in any undertaking, whether it is making a cake, designing an automobile, or building a house, it is essential that definite rules and regulations be carefully observed and implicitly obeyed. In other words, one must stick closely to the recipe. 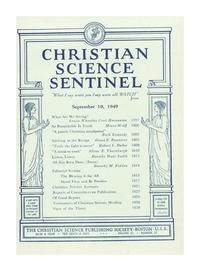