The clear, logical facts given in...

The clear, logical facts given in Science and Health by Mrs. Eddy have set my feet on the sunlit path of Truth. The greatest blessing it has brought to me is the healing of self-consciousness, which hampered every move I made. That overcoming came about so gradually that I hardly realized how free I had become. For the wonderful sense of freedom my small understanding of Truth has brought me, I am exceedingly thankful.

The application of Christian Science has helped me overcome severe headaches, a bee sting, loss of income, and a sense of loss at a time of the passing on of a loved one; and recently I saw it recover a valuable contract which had completely disappeared. It was a contract which I handled in my daily work and for which I was responsible. When needed one day, it was out of its place and seemed to have vanished from the records. I became much wrought up and spent a half day looking for it. Finally it came to me to leave it; that Mind knew where it was and that it could not be lost, for if I would he still and know that Mind directs me, I would find it. I went about my work and the next day was tempted to start searching again, but I obeyed and listened for the direction of Mind. Late that afternoon, as if someone spoke to me, the thought came that I had picked it up with a certain group of papers. They were so located that no matter how much overturning I might have done, I would never have uncovered the contract. But when I was still and let Mind take the helm, I found the needed paper.

Send a comment to the editors
NEXT IN THIS ISSUE
Testimony of Healing
I am grateful for a new view of... 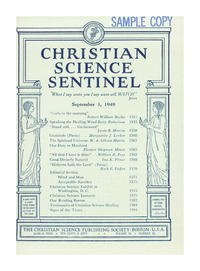