Christian scientists are a joyous people—joyous because they have some understanding of the truth that liberates, heals, and happifies. Early in his study of Christian Science the student learns that God is Truth, and the gaining of an understanding of this all-embracing Truth is predominantly his work. He further learns that the real man, the man of God's creating, is the reflection of God; and as he strives to know God, he learns to know man. As the truths of God and man are discerned, the inseparable relationship which has forever existed between them stands revealed, the relationship which our Master, Christ Jesus, acknowledged when he said to those "round about him" (John 10:30), "I and my Father are one."

It is this exact knowledge of the perfect relationship existing between God and man and the adherence to this knowledge which heals and liberates. As one grows in the knowledge of this relationship he learns that man possesses by reflection all the qualities and attributes of God. The reflecting of His qualities and attributes, such as wisdom, happiness, goodness, justice, and intelligence, in one's daily life must of necessity preclude all that is unlike Him. Hence, this reflection of Godlike qualities Inevitably results in health, happiness, joy, and true success. 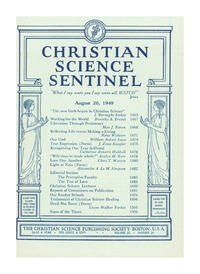