In the lexicon of the Christian Scientist, a word very often used is "study." And perhaps no word is so inadequately understood. Careless use of the word "study" has tended to restrict it to the mere perusal of what someone has written. This results in a concept of study as the acquiring of knowledge at the hands of another or through the mere reading of a text. The latter is too often entirely fruitless, while the former falls short of the full significance of study. The importance of study surely justifies a comprehensive grasp of what it should mean to that numerous body known as students of Christian Science.

To consider the study of the Bible and of the textbook, "Science and Health with Key to the Scriptures" by Mary Baker Eddy, as limited to what one can get from these books, is to consider them an end instead of the means to an end. It is to worship words, or even ideas, instead of the one Mind, God, which produces these ideas. Such consideration of study would rob one of the value of the books, just as the overestimate of words or symbols robs them of their true worth and utility and turns one's feet out of the true path. Is it not quite evident then that if we are to be students of Christian Science, we must enlarge our concept of the word "study" to include all its significance? 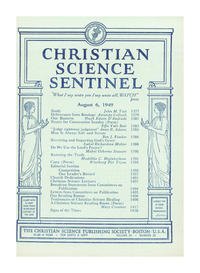