How reasoning based on God as cause brought buoyancy and healing

When the Psalmist sang (Ps. 24:1), "The earth is the Lord's, and the fulness thereof; the world, and they that dwell therein," he surely must have had some understanding of the basic fact that whatever has being in the universe exists as the effect of a beneficent and supreme cause.

That this cause is God, Spirit, divine Mind, whose every effect is spiritually mental, of like character, condition, and continuity to its source or cause, is the consistent and glorious truth revealed to this age by Christian Science. When writing in "Retrospection and Introspection" (p. 24) of her discovery of Christian Science, Mary Baker Eddy says, "During twenty years prior to my discovery I had been trying to trace all physical effects to a mental cause; and in the latter part of 1866 I gained the scientific certainty that all causation was Mind, and every effect a mental phenomenon." 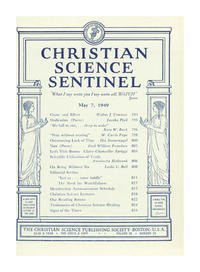