New instruments of destruction have made provisions for safety in time of conflict a question of immediate concern for all peoples. Cities because of their apparent vulnerability need defenses. This search for security is not new, however, for all through the Scriptures runs a golden thread of seeking a city of refuge, from Abraham, who "looked for a city which hath foundations, whose builder and maker is God" (Heb.11:10), to the culmination in Revelation of John's vision of the city foursquare. The light of Christian Science shows this city to be ever accessible.

God instructed Moses to command the children of Israel to set aside six cities as places of refuge, where one who had unawares and unintentionally slain anyone might flee and remain in safety. There were three such cities on the eastern side of Jordan and three on the western, so chosen as to make one easily accessible to all parts of the land. As long as the fugitive remained in the city, he was safe. 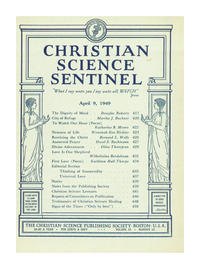