Christian Science is revolutionizing the cure of the sick, for it is proving that all disease is a mortally mental state rather than a condition of matter and that an opposite, or spiritual, state of consciousness heals it. Mary Baker Eddy, the Discoverer of Christian Science and Founder of its Christianly scientific system of healing, writes in "Science and Health with Key to the Scriptures" (p. 377): "The cause of all so-called disease is mental, a mortal fear, a mistaken belief or conviction of the necessity and power of ill-health; also a fear that Mind is helpless to defend the life of man and incompetent to control it. Without this ignorant human belief, any circumstance is of itself powerless to produce suffering."

These words are fraught with comfort for the sufferer, for while flesh and its conditions may appear baffling, he can be confident that he is master of his own convictions concerning them. Furthermore, Christian Science provides him with new convictions—convictions based upon the revelation of God, Spirit, as All, and of man as His spiritual idea which He holds in a state of perpetual health and perfection.

Send a comment to the editors
NEXT IN THIS ISSUE
Item of Interest
Occasionally Christian Scientists in the United States and abroad are... 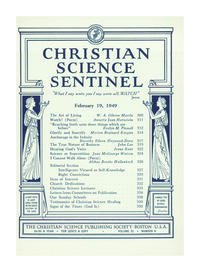