OUR LEADER PLANTED A VINEYARD

Pondering the thirty-first chapter of Proverbs one day, the writer realized that its description of a virtuous woman was a peculiarly apt one of Mary Baker Eddy: "She considereth a field, and buyeth it: with the fruit of her hands she planteth a vineyard" (verse 16). On pages 128 through 135 of the Manual of The Mother Church is the Deed of Trust by which land for the original edifice of The Mother Church was conveyed by Mrs. Eddy to The Christian Science Board of Directors. On this land, which had been purchased by her with money earned from the sale of her writings, from healing the sick and teaching Christian Science, our Leader may be said to have planted her vineyard. Through "the fruit of her hands" Mrs. Eddy had risen from, poverty to considerable wealth, and this wealth she used to establish and propagate the Cause of Christian Science.

A study of this Deed of Trust reveals unmistakably that Mrs. Eddy meant The Mother Church and its Christian Science Board of Directors to function permanently. Studying the Manual with the provisions outlined in this Deed of Trust in mind. Christian Scientists rejoice in the wisdom of our Leader, who was so divinely guided that "the fruit of her hands" is protected forever. The Church Manual stands supreme, upheld by the highest court of the Commonwealth of Massachusetts as the law governing the Christian Science movement. According to Article XXXV, Section 3, no new tenet or By-Law can be adopted, nor any amended or annulled. By the terms of the Deed of Trust, The Mother Church edifice can be used only for Christian Science services and church activities, so that no strange doctrine can ever gain admission. 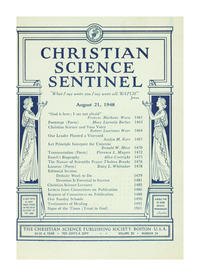