YOUTH AND AGE—UNKNOWN TO GOD

When the Pharisees said to Jesus, "Thou art not yet fifty years old," the Master stated the spiritual fact of his being, "Before Abraham was, I am" (John 8:57, 58). Christian Science, in reiteration of Jesus' teaching, reveals that the real man is ageless, that he exists coincident with God, and thus never comes into being, never enjoys a temporary noontide of being, never wears out. Mary Baker Eddy writes in "Science and Health with Key to the Scriptures" (p. 265): "The senses represent birth as untimely and death as irresistible, as if man were a weed growing apace or a flower withered by the sun and nipped by untimely frosts; but this is true only of a mortal, not of a man in God's image and likeness. The truth of being is perennial, and the error is unreal and obsolete."

Jesus knew man as God's likeness, not as the offspring of mortals. On this basis he maintained and proved man's spiritual and eternal nature in the face of material evidence to the contrary. Christian Science has reinstated his method of healing. The following experience illustrates this: A young child of Christian Science parents had legs which were badly bowed and did not straighten as the child grew older. Christian Science treatment was undertaken, but with no results until the parents realized that in their effort to know the truth about the situation they had mistakenly accepted as true the whole claim of material conception and birth. Then came the recognition that one cannot accept the basis of mortality and logically deny material conditions. They saw that man is of divine origin. His nature is spiritual, not materially structural, and therefore his uprightness or straightness is not determined by matter, but by his unending and uninterrupted relationship to his only Father, God. The peace that this realization brought was evidenced in the straightening of the child's legs within a few days. 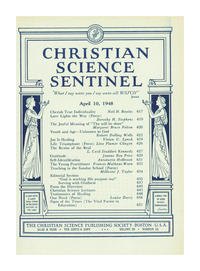