I think it is about time I testified...

I think it is about time I testified to the healing efficacy of Christian Science. First, I thank God that I have a mother who is a Christian Scientist, for through her untiring efforts and faith in Science I have been protected from accidents and discords of every description. Although I was brought up in the Christian Science Sunday School, I proceeded to investigate evil in many forms, with the foolish idea that if evil had no power I could dabble in it all I wanted to and still remain untarnished by it. Of course, if I had been a real student of Christian Science when I was in Sunday School, I would have known that the only power which evil seems to have is the power that we give it.

Finally, after many years of dissipation I had a nervous breakdown. I became despondent and did not want to live. But God's angels were watching over me. Through the help of a Christian Science practitioner I was able to make a long train trip to Connecticut, where my mother met me. After a few days she accompanied me to a sanatorium for Christian Scientists in New Jersey. I thank God for this wonderful place and for the loving and unselfish work of the Christian Science nurses and associates there. After a few weeks at this place I received a complete healing.

Send a comment to the editors
NEXT IN THIS ISSUE
Testimony of Healing
It is with great gratitude that... 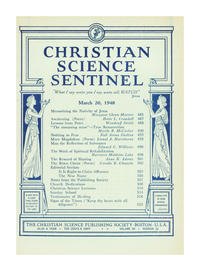