WHAT ARE WE ACCEPTING AS TRUTH?

Do we believe that God, Spirit, is All-in-all, and that man is spiritual and immortal, the reflection of the divine perfection? And do we act in accordance with the truth we affirm? Or do we still think and act as if the testimony of the material senses were real, and thus in belief shut out the divine aid? Then do we sometimes complain that there is no hope and comfort in God?

Jesus declared that "with God all things are possible" (Matt. 19:26). And he did his numerous healing works by refusing to accept the material sense testimony as real. He could not have raised from death the widow's son at Nain if he had accepted as true the material evidence of death; he could not have healed the leper referred to in the first chapter of Mark if he had believed that disease belongs to God's man. He acknowledged the fact that God alone has power, and that health is God-bestowed on man. Had Jesus seen only the "five barley loaves, and two small fishes" (John 6:9), the supply would have been inadequate indeed to feed the five thousand; but he rejected the sense of lack and limitation and acknowledged abundant supply as ever at hand. 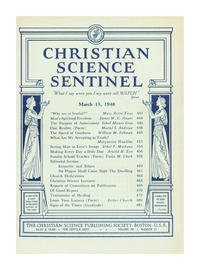