NO SENSE OF LOSS IN MIND OR MAN

On the evening of the day that Christ Jesus demonstrated God's unfailing provision for man, humanly evidenced in the supply of food for the five thousand, he walked on the sea to join his disciples who were rowing toward Capernaum. "And immediately the ship was at the land whither they went" (John 6:21). Many of the multitude followed him in ships, and sought to know what they should do to "work the works of God."

Jesus told them that the all-important thing for them to do was to believe on him whom God had sent; that is, to accept and understand the Christ, or saving idea of God and man, which it was his mission to proclaim. In his forthright talk to them he included this statement (John 6:39): "This is the Father's will which hath sent me, that of all which he hath given me I should lose nothing, but should raise it up again at the last day."

Send a comment to the editors
NEXT IN THIS ISSUE
Editorial
HAPPY VACATION! 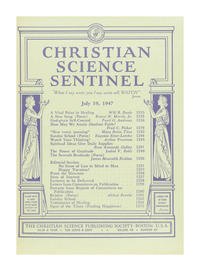