Jesus said (John 5:30), "I can of mine own self do nothing," and he continued, "As I hear, I judge: and my judgment is just; because I seek not mine own will, but the will of the Father which hath sent me." Let the import of this simple statement dawn on the humble thought, which is expectantly waiting to receive the Christlike message that shows us the way we must take to overcome the problems of human existence and destroy the accompanying sense of anxiety, fear, indecision, and doubt with which we have wrapped ourselves about, often very tightly!

Not for a single moment did Jesus of Nazareth think that the healing power which he expressed and the words of comfort which he spoke to the weary and downcast originated with him. Had he believed this, pride, self-importance, human means and methods would have crept into his thinking. The knowledge that the healing power was entirely outside his human self resulted in his quiet and successful earthly mission of healing and teaching.

Send a comment to the editors
NEXT IN THIS ISSUE
Article
Who Are the Chosen People? 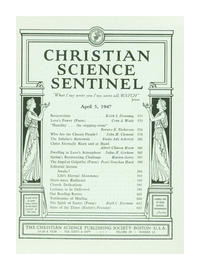