No happenings of earth, no shattering blast,Can scatter or destroy the sun's bright rays;Unharmed, untouched, throughout the centuries pastTheir light has shone, and ever through the daysWill beautify and cast their radianceOn land and sea and every living thing,No violence of earth's experienceExtinguishes the glory which they bring.

And what of man, the brightness of creation?Is he less cared for than those beams of light?Ah, no, the man we see in revelationReflects the Father's glory, peace, and might.This light now streams through paths which mortals roam:Man shines on earth, but heaven is his home.

Send a comment to the editors
NEXT IN THIS ISSUE
Article
Why Plead for Baal? 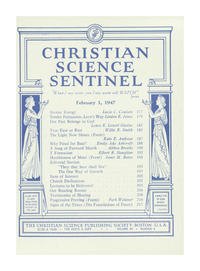