Testimonies in The Christian Science Journal...

Testimonies in The Christian Science Journal and in the Sentinel have been a great source of inspiration to me.

During the recent war I tried to enlist in the Army, but was rejected for chronic valvular heart disease. Four doctors examined me, and all agreed in the diagnosis. I had always suspected that something was wrong, but to have my suspicions so positively affirmed was a great shock to me. I began to manifest more acutely the symptoms that are supposed to accompany this disease. I became so weak that it was an ordeal to put in eight hours at the office. Although I tried to apply the rules of Christian Science, I seemed to be getting worse. 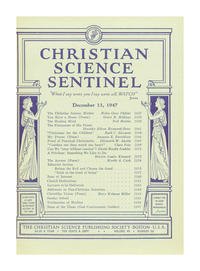