I write this testimony in gratitude...

I write this testimony in gratitude for all that Christian Science has done for me during the past fifteen years, and with the sincere desire that it will help someone to the understanding that the truth, as revealed to our revered Leader, Mary Baker Eddy, heals when it is sincerely applied.

During the past eighteen years I have been dependent on my own efforts for financial support, and about two years before Christian Science was presented to me, when I had been earning my own living for a little over a year, I suffered a complete collapse, which took the form of paralysis. During the course of this illness several doctors were consulted, and among the opinions expressed was one that I should never again be sufficiently strong to go on working. One doctor, however, who had known me for a number of years, encouraged me not to accept this verdict, and, through what he called psychoanalysis showed me that my trouble was largely mental. Under his treatment I recovered from the paralysis and after a time I again began to work.

Send a comment to the editors
NEXT IN THIS ISSUE
Testimony of Healing
In grateful acknowledgment of... 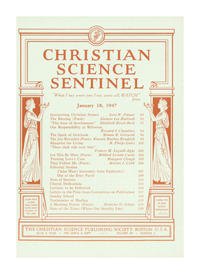