"The guest of God"

Eleven-Year-Old Janie was helping her mother pack because they were moving to another city. The thought of leaving her friends and familiar surroundings had been troubling her. Now, she thought, was a good opportunity to talk with Mother. Mother would help her to think rightly, and thus, she would be freed of the fear that was becoming very real to her.

For as many years as she could remember, Janie had attended the Christian Science Sunday School, so she had learned how important it is to think rightly. She had heard her father say the move to the new city meant a promotion for him, and she had learned in both her day school and her Sunday School that we all need to go forward, and be promoted, so she was glad that her father had been promoted in his work. But she was beginning to be fearful of the new surroundings and of meeting strangers. 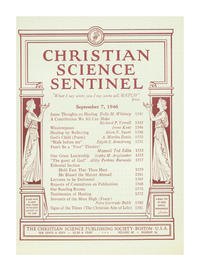