Over thirty years ago I had my...

Over thirty years ago I had my first healing in Christian Science. I had been left a widow with several children, and was grieved and worried. My mental condition soon resulted in physical difficulty. I began to suffer from heart trouble, and the doctor finally told me he could do no more for me. Being the daughter of a physician, I had never known anything but materia medica, and when told there was no hope for me, I was in despair. A dear friend seeing my need told me of Christian Science and how it had healed her. She lent me Science and Health by Mrs. Eddy. I knew nothing about it, but like a drowning person I was willing to try anything.

That night when I was alone I opened the book and with the very first words I read a glorious light flooded my being and I was healed, though I did not realize it until two days afterward. I only knew I was drinking at a fount which I had not known existed. I had not been able to sleep lying down, but I so completely forgot myself that I laid my head on the pillow and slept soundly all night. 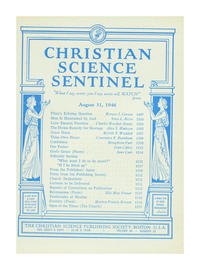