Amy had been taught at home and in the Christian Science Sunday School that God was, in reality, both Father and Mother to her. Many times she and her Daddy and Mommy had talked about this very fact. She could see clearly that already there had been, and of course there would be many times when they would not be near by to hold her hand. She realized that she must know all the time that God, who is always both Father and Mother, never would let go of her hand. Often Amy thought about these truths and proved them.

One time, especially. Amy saw how important it is to know God as Father-Mother and to listen carefully and obediently to His voice. Several families had taken their dinner to a large park in which there were both a pool for wading and a lake for swimming. The five children were together in the wading pool. The suggestion came to them to go to the lake and wade in it. And, without telling their families, they trotted off. In a short time back they came leading Amy, who was dripping wet and somewhat tearful. But soon she was quieted by the statements of the truth which were made to her by her parents.

Send a comment to the editors
NEXT IN THIS ISSUE
Editorial
"Hast thou heard the secret of God?" 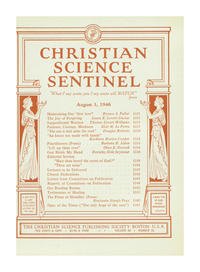