When the first news of the atomic bomb came over the radio, doubtless the first thought that came to many students of Christian Science was the subject of one of the Lesson-Sermons, "Is the Universe, Including Man. Evolved by Atomic Force?" A closely related question is this: Can the universe be destroyed by atomic force?

In studying the citations from the Bible and the Christian Science textbook, "Science and Health with Key to the Scriptures" by Mary Baker Eddy, which comprise these Lesson-Sermons, we learn that the only true creation is God's creation. spiritual and indestructible. How reassuring it is to read in Isaiah (45:18). "Thus saith the Lord that created the heavens: God himself that formed the earth and made it; he hath established it, he created it not in vain, he formed it to be inhabited: I am the Lord; and there is none else." And equally comforting and pertinent is that part of the definition of "creator" which reads (Science and Health, p. 583). "God, who made all that was made and could not create an atom or an element the opposite of Himself." 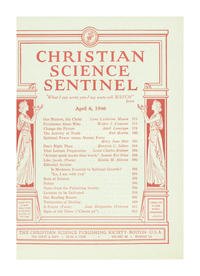