For quite some time I have been...

Newell A. Frye with contributions from Hilma Frye

For quite some time I have been helped by the testimonies of others, but have hesitated about sending in my own. I had been more or less interested in Christian Science for a number of years, in fact had been helped by its healing truths, but after the demonstrations were made I took it for granted that my work was finished and fell back into the channels of materiality. I figured that if anything unpleasant happened all I had to do was to call on a practitioner, state my case, and everything would be taken care of. Finally the testing time came.

I became ill with what the doctors call hardening of the liver. According to their diagnosis this disease is incurable. After receiving this news I made up my mind that there was nothing left for me to do but to fall back on Christian Science. I employed a practitioner, and she informed me that Christian Science was a life study and had to be carried out according to the teachings of our beloved textbook. "Science and Health with Key to the Scriptures" by Mary Baker Eddy.

Send a comment to the editors
NEXT IN THIS ISSUE
Testimony of Healing
A beautiful proof of God's... 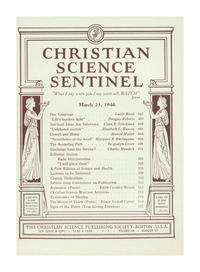