Teachers of the older classes in the Sunday school are always interested in learning how they can better teach their pupils to appreciate the Bible Lessons from the Christian Science Quarterly, to study them regularly and systematically, and to value them as divinely authorized lessons, which are important to their well-being. A Sunday school teacher in the Field shares with other workers the following experience, showing how the pupils in her class became interested in the Lesson-Sermon when they recognized that Christian Science is actually the Comforter promised by Christ Jesus and that its Discoverer and Founder, Mary Baker Eddy, was called of God to reveal the truth to mankind.

I have never experienced greater joy than that of teaching the older girls in the Christian Science Sunday School. I began with a class of four, two of whom reached the age of twenty in a few weeks. I had been told that no early transfers were being considered that would affect my class but that the class might be expected to grow by the enrollment of new pupils in the Sunday school. Working with the two pupils, I remembered the Master's sayings. "All that the Father giveth me shall come to me," and, "I, if I be lifted up from the earth, will draw all men unto me." I opened my thought to the limitless resources of Soul and knew that those who needed what I had to give would be drawn to the class by the natural, attractive power of Truth.

Send a comment to the editors
NEXT IN THIS ISSUE
Testimony of Healing
We read in "Science and Health... 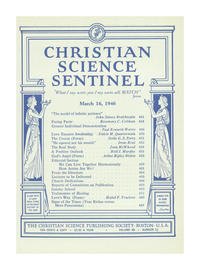