"The man whom ye seek"

The experiences related in the sixth chapter of II Kings, verses eight to twenty-three, graphically portray the ever-presence and redemptive power of God in the midst of the illusory human struggle with ignorance, fear, and hatred. When the Syrians were temporarily made blind in their attempt to seize the prophet Elisha and the Israelites, this great man said to them, "This is not the way neither is this the city: follow me, and I will bring you to the man whom ye seek." "But," the Bible narrative continues, "lie led them to Samaria." Arrived at Samaria, Elisha restored the Syrians' sight, bade the Israelites provide them with food and drink, then allowed the enemy to return to their own "master." The record concludes, "So the bands of Syria came no more into the land of Israel."

It seems obvious in the events of this chapter that Elisha's purpose in thus dealing with the Syrians and the Israelites was to expose the unreality of fear and hatred, greed and belligerence, by enabling them to feel the salutary effects of love. As a prophet of God, he wished to lead them to the understanding that the man they sought was neither Elisha the Israelite nor a Syrian, but the man of God whom he represented— the true selfhood, essentially loving, innately spiritual, eternally harmonious. In other words, Elisha exhibited both to the Syrians and to the Israelites the true nature of God and man in the divine Science of being. This was the same message which Christ Jesus, the Way-shower, later brought to the world. It is the message which Christian Science, the full revelation of Truth, is demonstrating in this age. It is the Word of God forever appearing unto men. 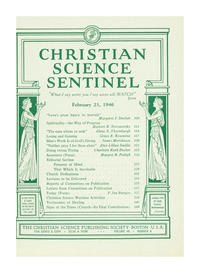