The Lesson of Obedience

Mary Baker Eddy followed closely in the footsteps of our great Master, whose footsteps were all taken in direct obedience to the will of God. But Jesus "learned .... obedience by the things which he suffered," says Paul, and Mrs. Eddy also learned obedience by drinking from the same cup of suffering. "Obedience to Truth," says our Leader in "Science and Health with Key to the Scriptures" (p. 183), "gives man power and strength. Submission to error superinduces loss of power." These statements indicate what gives us the power to heal all manner of disease and sin, for without obedience to Truth we are found "having a form of godliness, but denying the power thereof" (II Tim. 3:5).

The Christian Scientist could not go through several years of close contact with the men and women in our armed services without learning that obedience to the Christ, Truth, and its divine law is a prime requisite for healing quickly, and also for preparing one to receive a quick healing by the Christ-comforter. Obedience to the law of God in Christian Science begins at once to break the lawlessness of disease and sin, and healing is inevitable. 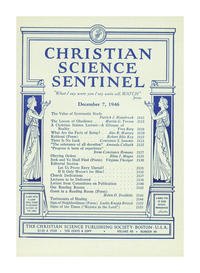