The Child of a King

Jimmie was attending a new school, where he knew none of the children. They were not friendly, and he did not like them because they stared at him. No one smiled at him. The little girl behind him told him that nobody liked him. He closed his eyes and was trying to think of some truth which would make him happy. Suddenly the teacher told him to wake up. The week had been a miserable one for Jimmie, and as he walked home Friday after school, he felt as though he never wanted to return to that school again.

However, at the Sunday school hour on the following Sunday Jimmie learned some things that made him feel better. The pupils talked about God. They took the seven names of God which Mary Baker Eddy gives us in the textbook, "Science and Health with Key to the Scriptures" (p. 465): "God is incorporeal, divine, supreme, infinite Mind, Spirit, Soul, Principle, Life, Truth, Love." They thought what each one of these names means. 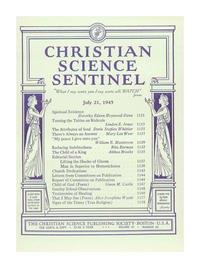