When something in the news of the day over the radio leaves us with a feeling of uneasiness and concern, the familiar incident in the life of the prophet Elisha at Dothan should bring to us comfort and inspiration. Surrounding the city was a great army of soldiers sent to apprehend the prophet and take him a prisoner to the king of Syria, whose enmity he had incurred.

According to sense testimony, the situation was indeed an ominous one. But when Elisha's servant came to him in great alarm, crying (II Kings 6:15-17 ), "Alas, my master! how shall we do?" the man of God, with the calm assurance of an absolute faith in the ever-presence and omnipotence of the infinite All, replied, "Fear not: for they that be with us are more than they that be with them." And then he prayed, "Lord,... open his eyes, that he may see." And the young man's eyes were opened, and he saw that "the mountain was full of horses and chariots of fire round about Elisha." The story indicates that not only was the prophet saved from capture and harm, but also a conflict between the soldiers and the inhabitants of the city was averted. 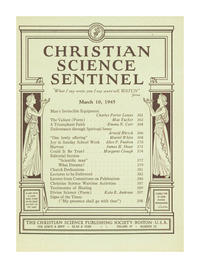