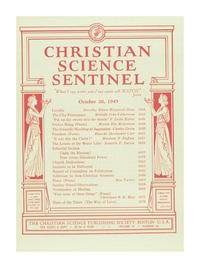 In a period like the present, of startling changes, of falling dynasties, signal defeats and victories, the quality of loyalty and of what is called outstanding devotion to duty is displayed both individually and collectively, in the air, in foreign lands, on the broad seas, and also in the conduct of business and in the unspectacular quiet of the home.
Article

A Soldier about to embark for overseas service was reported to have written his family that he was crawling into the ninety-first Psalm for the duration.
Article

"Put up thy sword into the sheath"

Physical scientists maintain that if it were possible to eliminate all friction, a machine would never wear out.
Poem

God, the Principle of being,Mind, the all-inclusive All,Has no consciousness of evil,Is not fettered by its thrall.
Article

The Scientific Handling of Aggression

Once only in all her published writings has the Discoverer and Founder of Christian Science, Mary Baker Eddy, employed the word "aggression"; and in that single reference to the term she declares unequivocally that it must be renounced.
Poem

John and Peter in the prison pent,And Paul with sting of viper, knewThere was for them no real imprisonment,No power apart from God.
Article

"Is not this the Christ?"

Humanity yearns for the light of that Christly love and power which shone through every thought and deed of the gentle but decisive Jesus of Nazareth.
Article

The Lesson of the Water Lilies

One bright, summer day Jean went for a walk into the country with her friends Nancy and Mary.
Editorial

Some incidents in the story of Jacob, the son of the patriarch Isaac, as recounted in the book of Genesis, do not make pleasant reading.
Editorial

"What then are the so-called forces of matter?
Article

Contributions are most gratefully accepted by The Mother Church Treasurer from members and friends for the following funds:
Article

Friendly relations with the press have been maintained; editors continue to grant us space in generous measure, considering present-day restrictions.
Poem

Earth's tumult and its storms recede,And in their place are heardThe accents of the "still small voice"—The omnipresent Word.
Article

Teaching in the Christian Science Sunday School can be one of the most inspirational experiences.
Testimony of Healing

I wish to express gratitude for the help Christian Science has been to me in making the adjustments in the change from civilian life to a military camp, with all the confusion, fear, and feeling of separation which come with life in the service.
Testimony of Healing

It is with deep gratitude for...

It is with deep gratitude for what Christian Science has done for my family and me that I submit this testimony.
Testimony of Healing

I was attracted to Christian Science...

I was attracted to Christian Science several years ago by observing the unselfed love and devotion of a Christian Science practitioner under circumstances where a monetary or other material reward could not possibly be expected.
Testimony of Healing

It is quite reasonable to suppose...

It is quite reasonable to suppose that anyone who has been healed in Christian Science has a desire to express gratitude for it.
Testimony of Healing

Through my study of the Bible...

Through my study of the Bible and the Christian Science textbook, "Science and Health with Key to the Scriptures" by Mary Baker Eddy, God has healed me of many discordant conditions, for which I am deeply thankful.
Testimony of Healing

Many times during the past...

Many times during the past nineteen years I have had proof that Christian Science heals sickness, sin, and all inharmonious conditions.
Testimony of Healing

While reading the two inspiring...

While reading the two inspiring articles printed in The Christian Science Monitor dated January 6, 1945, calling attention to the fiftieth anniversary of the dedication of the original edifice of The Mother Church, I recalled many happy experiences, some of which I should like to share with those who may be interested.
Poem

"Fear none of these things"

CHRISTIANA B. K. MAY

The publication of a new solo setting for one of Mrs.