Twenty-eight years ago I was...

Twenty-eight years ago I was completely healed of Bright 's disease through the study and application of Christian Science. Since that time it has been my only physician. When it found me I was a helpless invalid. After all material means of healing had failed and all hope for my recovery had been exhausted, a friend asked me if I would read Science and Health by Mrs. Eddy. I had heard of Christian Science and was told that it healed, and in my extremity I would have tried anything. Before I had finished reading the chapter on Prayer I wanted to know what I could do to be healed. My friend told me about the practitioners, and we called one. About two hours after she was called, I got out of bed and dressed, and I have not been in bed since then because of illness.

The practitioner quieted my fears and told me to trust God. I threw away my medicine and relied wholly on her work and her understanding of what God is. The first difficulty to yield was that of paralyzed bowels. This healing came as I read Science and Health, some two weeks after I first asked for treatment. I had been troubled with abscesses in the ears and these were healed by Christian Science treatment almost at once. Soon everything began to improve.

Send a comment to the editors
NEXT IN THIS ISSUE
Testimony of Healing
Christian Science has helped me... 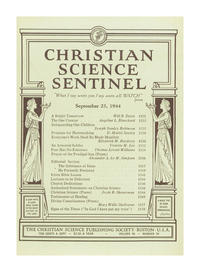