Certainly, whether we are soldiers or in civilian life, we must learn to "take orders" always from God. Obedience to God's orders enables one intelligently to obey orders from those in temporal authority.

A soldier within the continental limits became ill. All the symptoms of a leg infection, of which he had been a sufferer for several weeks at an earlier period in his life, were apparent. He had visions of being sent to the hospital as a result of this infection, for, although he was a Christian Scientist, he knew it was his duty to report to sick call the following morning if the ailment still persisted. He was on detached service away from his home field with an important task to perform, a task which had to be carried out without delay if it were to be well done. The future looked dark, and, as he brooded, became increasingly darker. 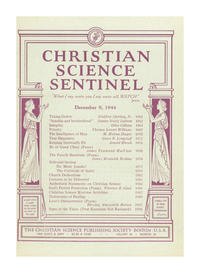