Paul said, "Now is the accepted...

Paul said, "Now is the accepted time; behold, now is the day of salvation." And in the Preface to Science and Health Mrs. Eddy writes (p vii), "To those leaning on the sustaining infinite, to-day is big with blessings." Today is indeed the day of salvation, and Christian Science is showing us how to lean "on the sustaining infinite." Through daily study of the Bible and Mrs. Eddy's writings we are sustained mentally, morally, physically, financially, and, above all spiritually. Mere words cannot express our gratitude for the blessing of Christian Science.

The first healing in our family by Christian Science took place a few months after we began to attend church services. Our younger boy was very uncomfortable, and we could not understand why. After two days it became evident a large boil was developing. The next day was spent in studying the chapter "Recapitulation" in Science and Health. His discomfort seemed to increase that day and the next, but the second night he rested well. Along toward morning his brother called us to come into their room. We found that sometime during the night two deep openings had appeared in the boil, allowing it to drain. The child himself had not known of them. In a very few days the healing was complete.

Send a comment to the editors
NEXT IN THIS ISSUE
Testimony of Healing
At the time Christian Science... 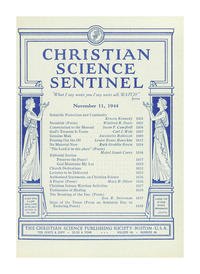