The Faithful and Understanding Samaritan

The familiar story of the good Samaritan, who ministered to the wounded man whom he found by the wayside as he journeyed from Jerusalem to Jericho, whom thieves had wounded and robbed, merits our attention again, for the world today is as wounded as any individual has ever been.

The great lesson to be learned by all true Christians is that the Samaritan was totally unconcerned as to any personal benefit or profit resulting from his act of charity. His concern was the tender care of his fellow man. We are told in the Gospel of Luke that the Samaritan took the wounded man to the inn, and paid the innkeeper for the care of the sick man, promising that on his return journey he would reimburse the innkeeper, should more money be needed. It was that golden extra which made it beautiful. He was a little kinder than necessary. 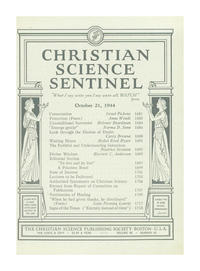