The recent course of human events makes one feel as did Macaulay when he wrote. "A single breaker may recede; but the tide is evidently coming in." The flood tide of constructive ideas is rising in the consciousness of men. On all the continents and on the islands of the sea, the tide is coming in. Unlike the ocean's tides, this flood tide rises never to recede, but to fill human consciousness with the intelligent ideas with which men can build a better world.

Four great nations, representing a substantial majority of the earth's people, have agreed that their objective is a world at peace, and have pledged themselves to united effort to that end. Nothing quite like this has happened before. In unanimity, sincerity, and practical implementation for avoiding mistakes of the past and assuring the future peace they so earnestly desire, it is unique. Describing the spirit motivating the conferees in Moscow, Secretary of State Hull told Congress, "It has never been my fortune to attend an international conference at which there was greater determination on the part of all the participants to move forward in a spirit of mutual understanding and confidence."

Send a comment to the editors
NEXT IN THIS ISSUE
Item of Interest
The Normal class in the Board of Education was held early in... 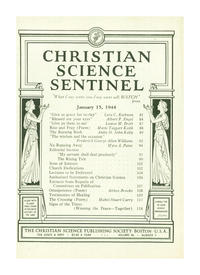