Grief Can Be Overcome

If the revered Founder of the Christian Science movement had done nothing more for humanity than pen the words, "Life is real, and death is the illusion," she would have merited its eternal gratitude. These revolutionary words occur on page 428 of the chapter on Christian Science Practice in "Science and Health with Key to the Scriptures" by Mary Baker Eddy. For hundreds of years mortals have accepted death as real and inevitable, have feared it and used every known device to postpone its coming.

Mrs. Eddy herself, lonely and desperately ill, once looked death in the face. Then she turned to her Bible, and discovered in its light that Life is God, and that death, the opposite of Life, is the illusion. She instantly rose, completely restored, later to take her place as the destined Leader of the Christian Science movement. From then on, Mrs. Eddy lost her fear of and belief in "the last enemy," and she endeavored to instruct her followers in the truths of being, that they too might overcome their fears and binding beliefs. 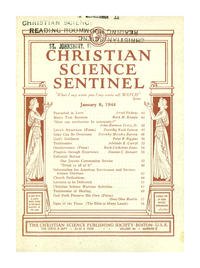