"Over continent and ocean"

To bring spiritual power to the aid of unhappy humanity is a paramount duty and privilege of the Christian Scientist today. The magnitude of the task may at times loom large before him, tempting him to regard his efforts as of little consequence. This type of suggestion is one of the commonest weapons of animal magnetism, but its powerlessness to obstruct the irresistible activity of divine law is hinted in Mary Baker Eddy's bold statement in "Science and Health with Key to the Scriptures" (p. 559): "The 'still, small voice' of scientific thought reaches over continent and ocean to the globe's remotest bound. The inaudible voice of Truth is, to the human mind, 'as when a lion roareth.' It is heard in the desert and in dark places of fear."

Here is assurance that intelligent prayer transcends all barriers, bringing solace and healing. What and where are the "desert" and "dark places of fear"? Would not the desolate outlook of those in many prison camps be a desert? The far-off battle fronts, lonely homes, war-torn nations, all who suffer keenly—might not these be likened to "dark places of fear"? But divine Mind is everywhere, and its power ever available. When unsought or unrecognized, this power reaches humanity only in small degrees. Many languish when they need only awaken. To quote the poet Whittier, 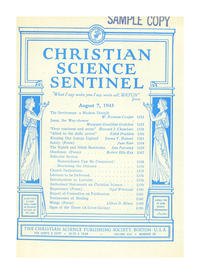