A little girl was told by her playmates that there were ghosts in the attic of her home. Believing them, and beginning to picture the shapes and sizes of the apparitions, she became ill because of her fears. When questioned by her mother, she told her about the ghosts. The mother comforted the little one, saying: "There is no such thing as a ghost. Put your hand in mine and we shall go to the attic and you will see that there are no ghosts there." Trustingly the child explored the place with her mother, finding only the friendly things with which she was familiar.

After the child had grown to young womanhood she became a student of Christian Science. On many occasions, when sickness has assailed her or members of her family, she has remembered that just as the ghosts in the attic were pure illusion, so according to the teachings of Christian Science there is no reality in disease. 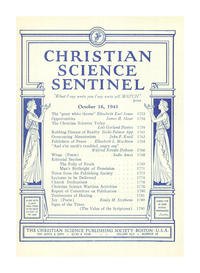