To those who are now going through fiery trials with attendant loss and suffering, the thought of the permanent peace which may arise out of the debris of today is encouraging and stimulating. Their sacrifice will not have been in vain if in the aftermath of the present conflict self-abnegation has helped to build peace in which future wars are outlawed, the means of making them debarred, and those now engaged in waging them are trained instead in the fundamental truths upon which permanent peace is based.

In the transformation from the old to the new and the building of better world conditions, Christian Science is playing an indispensable part. Spiritual truths alone are adequate to destroy belief in material fables and philosophies, which are responsible for world unrest, human warfare, and "man's inhumanity to man." This Science reveals the spiritual facts of being, proclaiming the real man's indissoluble relationship to God, from the understanding of which men and women during the dark and difficult days are deriving vision, resourcefulness, and strength. For Christian Science shows that evil, being unreal, vanishes away, while spiritual good forever remains panoplied in its own imperishable glory. 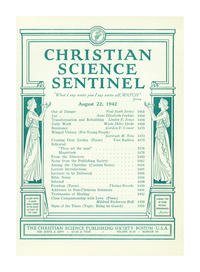