In the trials and temptations which lay ahead, the words of benediction, "This is my beloved Son," which had rested upon Jesus after his baptism by John, must have remained to comfort and sustain him in his darkest hours. The relationship forever existent and forever in operation between Mind and its idea, manifest as the Christ, was what the life of Jesus revealed. Human experience might often mean malignity and disappointment. Men might persecute, forsake, and betray, but the divine benediction remained. Nothing could change the fact of sonship, of approbation.

"The blessing of the Lord, it maketh rich, and he addeth no sorrow with it," declared the wise man. The sorrows which come to mankind are not the concomitants, results, or penalties of the Lord's blessing. They are solely the mortal inheritances of the illusion that good and evil are interrelated; the outcome of believing that blessings are more reliable and profitable if sought materially than spiritually. Because men continue to seek benedictions in ways which are selfish and temporary, limited and unworthy, in ways which personal sense dictates and subscribes to, such seeming blessings, sooner or later, have sorrow added to them, until no blessing would appear to be left. On page 81 of "Miscellaneous Writings" Mary Baker Eddy writes, "In the desolation of human understanding, divine Love hears and answers the human call for help; and the voice of Truth utters the divine verities of being which deliver mortals out of the depths of ignorance and vice. This is the Father's benediction." 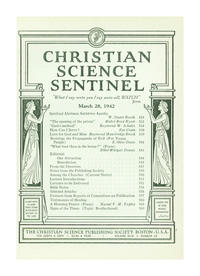