The great Daniel Webster wrote, "Liberty and Union, now and forever, one and inseparable." Though he spoke for his own country, he saw beyond the confines of his time and place. He knew that he stated an eternal fact. Other far-sighted statesmen have seen and stated this truth.

It must be clear to the thinker that the basis of Christianity is unity. Tersely its Founder summed it up in these words: "He that is not with me is against me." 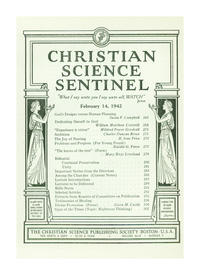