The average young man or woman of today dislikes to be thought different from his companions either in opinion or in action, and desires to avoid being considered queer. It may be for this reason that the individual occasionally departs from moral and ethical standards, as he would not have done had he felt secure from the fear of condemnation of his fellows. A mother discovered that her small son and another lad were doing something that they should not do. The little son told her that he did it at the instance of the other boy, who said that if he did not do so he would be a coward. The intelligent mother explained to her son that if he did it for fear of being called a coward, then he was indeed a coward to be moved by such a motive of fear. She had the pleasure later of seeing her son refuse to co-operate in the wrongdoing, stating his reasons to the other lad, who replied: "All right! Let's do something else."

One should not do wrong simply because he fears criticism or ridicule if he does right. To act as others do because one fears to be independent is to lose sight of one's true identity as a child of God. While true identity can never be lost, because it is the reflection of God, yet the manifesting of it in human experience may be hindered for a time by disregard and neglect. A priceless treasure should be rightly valued. In these days, with many of our youth regimented in uniform and mode of living, it is well to remember that everyone is individual, and that true individuality cannot be merged or lost any more than can the rays of sunlight be lost in mingling with one another. Variety and individuality are inherent in nature. No two flowers are strictly alike; no two sunsets are identical; no two trees of the forest are entirely uniform. So each one possesses identity, derived from the one Mind, and his identity is preserved in God. In his first letter to the Corinthians, Paul asked, "Who maketh thee to differ from another? and what hast thou that thou didst not receive?" 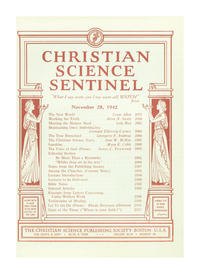