The election of Francis Lyster Jandron, C.S.B., a Trustee of The Christian Science Publishing Society, to be a Director of The Mother Church, The First Church of Christ, Scientist, in Boston, massachusetts, was announced on September 12. Mr. Jandron succeeds Mr. William P. McKenzie, deceased, and has been nominated for the Trusteeships heretofore occupied by Mr. McKenzie. Mr. Jandron has resigned from the office of Trustee of the Publishing Society.

Mr. Jandron, who is a native of Canada, was educated in the island of Jersey and in London, England. He was actively engaged in industries in Canada and the United States for seventeen years, during which time he had become treasurer and assistant general manager of the Packard Motor Car Company at Detroit, Michigan. In 1921, he withdrew from a business career, so that he might devote his entire time to the practice of Christian Science healing. 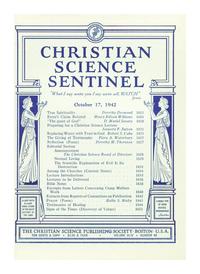