The Camp Welfare workers and state committees appointed for the purpose of ministering to the needs of Christian Scientists and those who have expressed an interest in Christian Science in the training camps of the United States are sending interesting reports to headquarters concerning their activities at these camps. They begin their work by supplying copies of The Christian Science Monitor. This is followed by presentations of the Christian Science textbooks, the Bible and "Science and Health with Key to the Scriptures" by Mary Baker Eddy, and other Christian Science literature, for the Army and Navy libraries, reading rooms, recreation halls, and other buildings, and by making the acquaintance of the men in service whose addresses have been forwarded to them from Boston, and others who they have learned are interested in Christian Science. In many camps the workers are conducting Sunday services and midweek testimony meetings. Elsewhere they assist in arranging transportation for the men to services in near-by towns. Sometimes they take them to places where they may spend the evening in quiet reading or conversation with one another, when no such place is as yet available at camp.

Accomplishment of the initial and most pressing task of organizing the Camp Welfare Activities of The Mother Church, in the states where the very large camps are located and in Hawaii and the Canal Zone (supervised by state committees appointed with the co-operation of branch churches), is now being followed by similar organization of the work in the other states in order to provide suitably for smaller stations and to look after the interests of men from those states who are now serving in the Army and Navy. 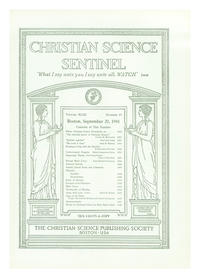