When I was in boarding school I awoke one morning in...

When I was in boarding school I awoke one morning in excruciating pain, with knee swollen to twice its normal size and bent so that I could not touch my foot to the ground. The headmistress immediately sent for a doctor, in spite of my protests, and contrary to the agreement which she had with my parents to call a Christian Science practitioner. He pronounced it tuberculosis of the knee joint and ordered the leg to be put in plaster cast. I refused to comply with this, and after I had repeatedly refused to accept medical help of any kind, my family was called, and I was taken home. Under the watchful eyes of many opposed to Christian Science in the little town in which we lived, my healing seemed slow, but in three months it was complete. This was about eighteen years ago, and the healing has been permanent.

While I am very grateful for physical freedom, the healing is still more precious to me because, through my study of Christian Science at that time, my understanding of Truth increased, and I was enabled to go through class the next year with the teacher who was my practitioner in the healing. I could never never express my gratitude sufficiently for the blessing of class instruction. Through the understanding gained in going through class, I was enabled to overcome a morbid and fearful disposition and extreme shyness, which made life scarcely worth living, because every daily contact with my fellow man was an ordeal, instead of being a source of interest and pleasure, as it is now. During the overcoming of this difficulty, my thought turned many times a day to the definition of man on page 475 of Science and Health by Mrs Eddy especially to the statement, "That which has no separate mind from God; that which has not a single quality underived from Deity." Another source of help was the reply given to the question on page 77 of "Miscellaneous Writings" by Mrs. Eddy, and the sentence from another of her works, "The First Church of Christ,Scientist, and Miscellany" (p. 188), "Spiritual sense and not the material senses convey all impressions to man." This healing has meant much to me, and I am unceasingly grateful for it.

Send a comment to the editors
NEXT IN THIS ISSUE
Testimony of Healing
The practice of Christian Science brings to humanity the... 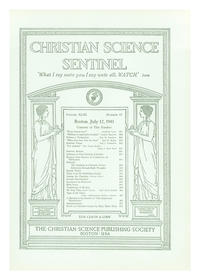