Mrs. Eddy was fully aware of the necessity of proving that the Science she had discovered would relieve humanity of its burden of sin and disease. Of this she was fully convinced. Her words must be authenticated by works following. Through her own ministration and that of her early students, the healing works were soon established. Furthermore, circulation of the textbook, "Science and Health with Key to the Scriptures," was followed immediately by healings of various types of discord from reading its inspired pages. The healed were prompted to send to Mrs. Eddy and to the editor of the Journal of Christian Science testimonies of these healings as expressions of gratitude for the lifting of their burdens.

As the textbook was more widely circulated, the number of these testimonials increased, and from an ever-widening field. From all parts of the United States, from east and west, from north and south, from the great cities as from humble hamlets, came these evidences that the healing Christ set forth in her textbook was working the same type of cures that are so definitely set forth in the New Testament. That Mrs. Eddy was heartened by this great "cloud of witnesses," we may well believe. 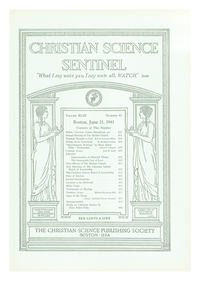